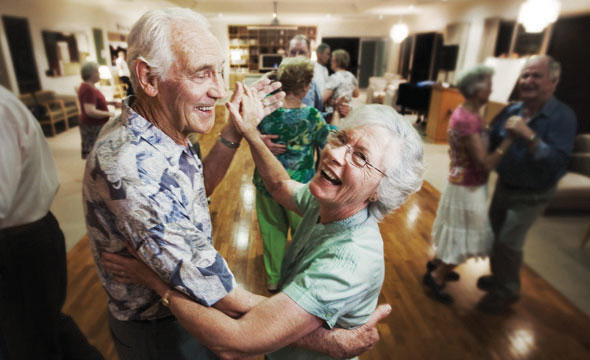 Dancing is the magic medicine!

Across 3 fabulous locations in London, the UK community of Arthur Murray dancers are proving that having fun, keeping fit and retaining a healthy mind can be achieved in the very same place – The dance floor!

Presently, in the 107th year, The Arthur Murray Dance Studios can be found in over 300 locations across the globe, from London all the way to Australia, providing a global dance network for all members, where dancing has long been considered the fun loving alternative to more traditional exercise as a method of contributing to a healthy physical body.

However, as the teachers and community of Arthur Murray UK have been well aware of, for many years, it is now being heavily documented, with an increased body of research, that ballroom and social dancing have many more positive effects on a person’s holistic well-being in a broader sense.

For example, positive mental health and well-being has been intrinsically linked to a person’s sense of community and belonging and this too contributes to the maintenance and improvement of a persons’ neurological health. Harvard University conducted a study over the course of 80 years, which focused on one subject – happiness.

The study revealed that the people with the least recorded number of neurological diseases and with a greater sense of happiness were the ones with stronger relationships and sense of community. 70 different studies over the world were conducted to reach this conclusion, with 3.4 million participants evidenced; that the people who lived longer, were those with stronger community links and relationships.

Arthur Murray Studios London Director Rio has been watching the positive effects of community in his studios for years:

I truly believe that social connections keep you healthy. It’s incredible to watch a person’s confidence grow as their ability improves. They are sharper and appear more capable in the rest of their life, living with passion and purpose. It is obvious how social dancing improves the mind, but I believe when community and reduced loneliness is combined with this, you have a person who is healthy and most importantly the happiest they’ve ever been.

It has also been well evidenced that a person’s mental health and well-being is intrinsically linked to their continued endeavours towards training the brain with cognitive therapy and what better way to achieve this than with learning to ballroom dance.

The complex mental coordination required by learners of dance activates several regions of the brain; the cerebellum, the somatosensory cortex and the basal ganglia which triggers kinaesthetic, rational, musical and emotional responses. This simultaneous stimulation has been proven to strengthen neural connections and improve memory. A major study carried out by the New England Journal of Medicine in 2003 reported that the positive effects of stimulating ones’ mind by dancing actually reduced and in some cases stopped entirely the onset of dementia.

Social dancing such as foxtrot, waltz and swing requires constant split second, rapid fire decision making, which is key to maintaining intelligence, because it forces your brain to regularly rewire its neural pathways, giving you greater cognitive reserve and increased complexity of neuronal synapses”

So whether a person is new to the sport of dance or someone who has graced the ballroom for many moons, it seems that dancing may be the key, to keeping a healthy mind active, for the duration of life and Arthur Murray Studios in not only in London but in 300 sites across the world, hold open their doors for you today!